The Birds of Cape St. Mary

Today, the final day of my Newfoundland adventure, I am crossing off one of the “must see” places from my list: Cape St. Mary’s Ecological Reserve and the promise of a close encounter with 65,000 northern gannets, kittiwakes and common murres. I left St. John’s at 6 am for the 2-hour drive south west.

I approached the cape under deepening fog and the steady punch of a fog horn — the only sound on earth both reassuring and ominous at the same time.

I quickly devised my own 3-point fog intensity system: 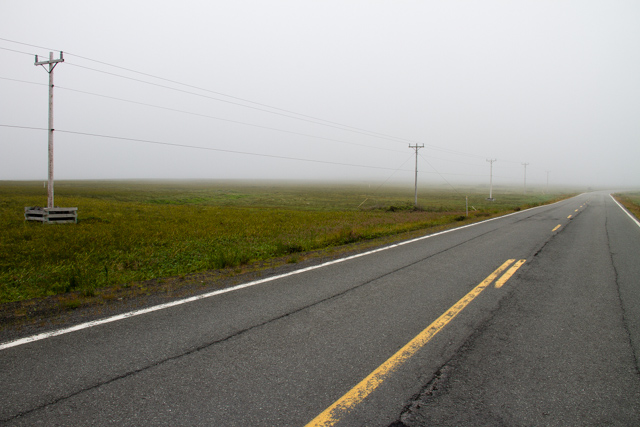 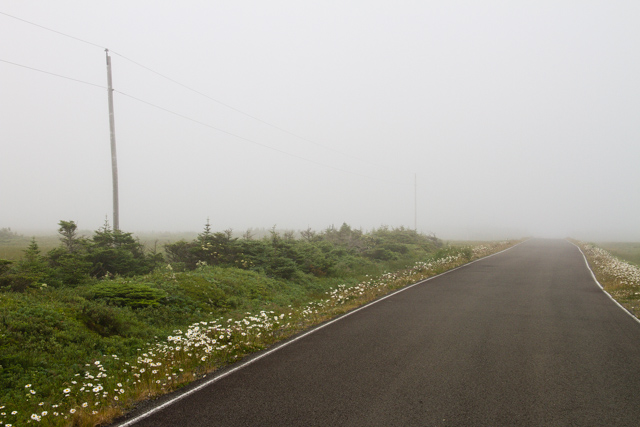 3. Three sheep and that’s about it fog 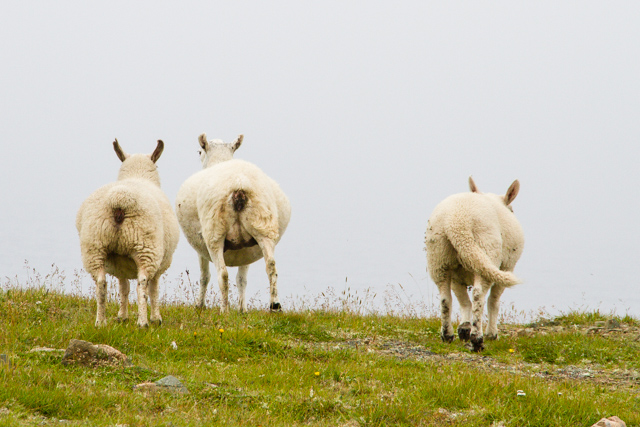 I was out on the cliffs at the reserve by 8:00 am, concerned now that the fog was dense enough to ruin any photographic ambitions I may have had. I took a few early photos even though knowing without looking that they wouldn’t make the grade. After a couple of hours patience, the fog lifted to sunlight and I began snapping away in earnest. (I also took some video footage which I have posted below).

With a 2-meter wingspan, the gannet is the largest seabird in the North Atlantic region. Gannets swim and fly almost their entire life in and above the sea, only coming on land in the spring to nest. In order to take flight, they need to catch a good wind under their wings. On land that would mean a running start, but gannets are clumsy on land. That’s why they nest high up on steep coasts, where the strong seawind provides lift. All they need to do to take off is to spread their wings. 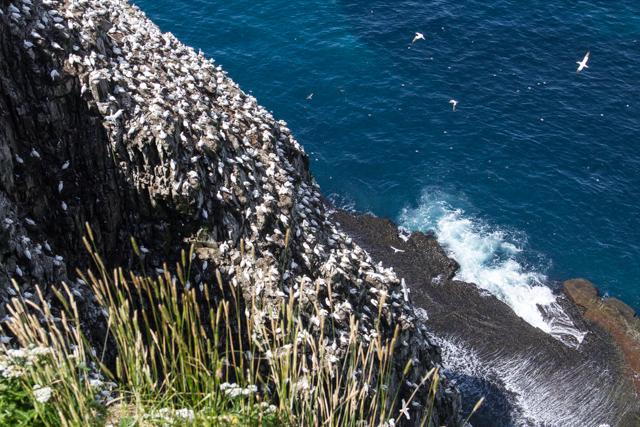 A cliff of northern gannets 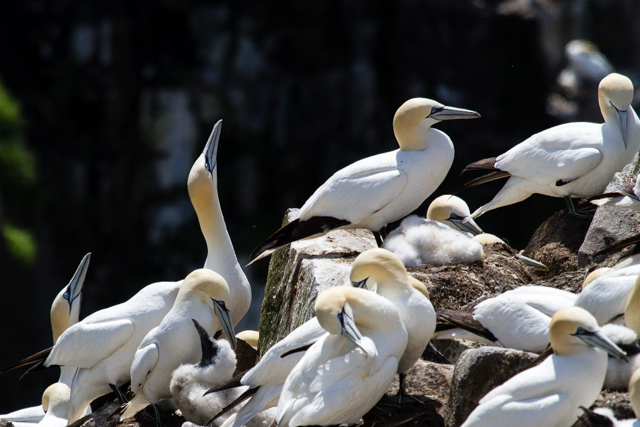 Chicks look as if they are about 10 days to 2 weeks old. 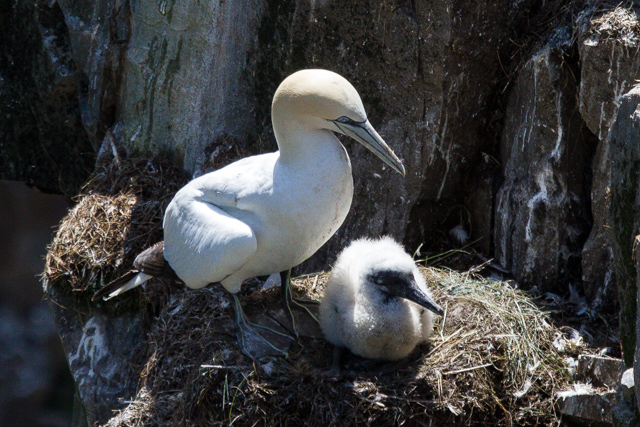 Mother and child. Male and female gannets are similar, but females can be recognized by the greenish ‘veins’ on their webbed feet. 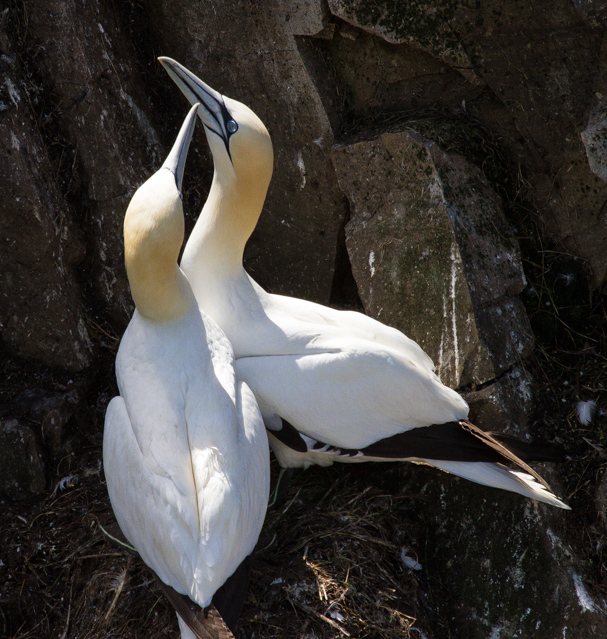 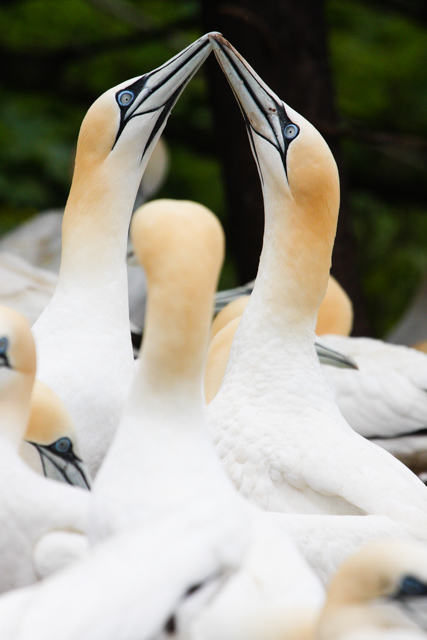 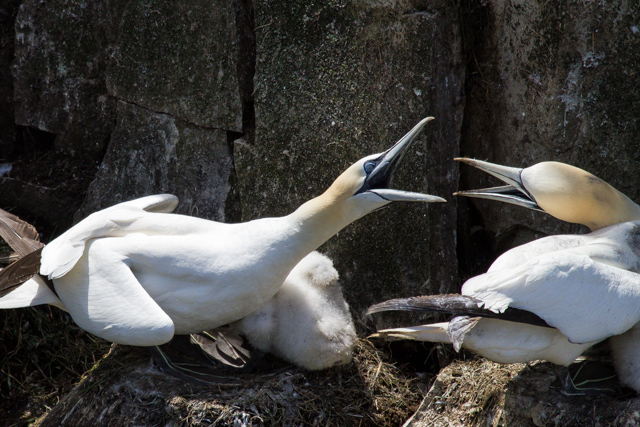 Sometimes, they play rough. They live in such close quarters that disputes are inevitable, though they generally subside as quickly as they erupt. 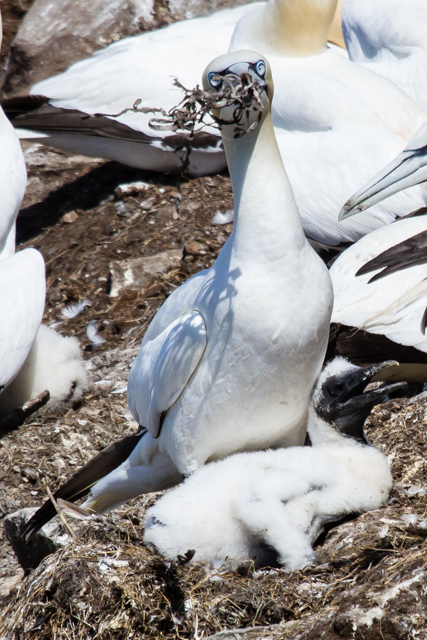 Gannets use anything they can find for building rudimentary nests. Both adult and young alike began an odd fluttering motion in their throats (which you’ll be able to see better in the video below). The biologist said it was to regulate heat, similar to the panting of a dog. (I chose this shot partly because of the slightly comical look of a head-on gannet) 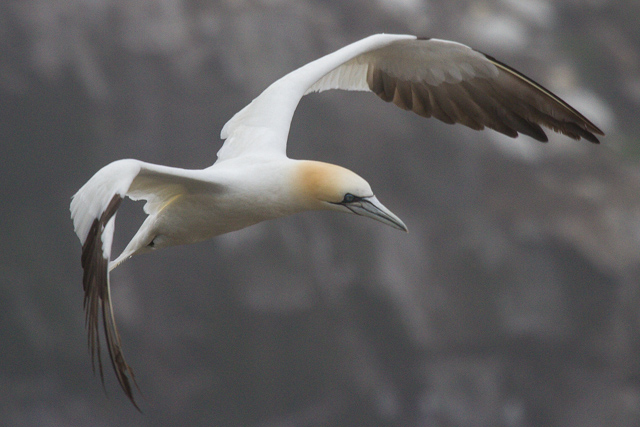 Banking for a landing 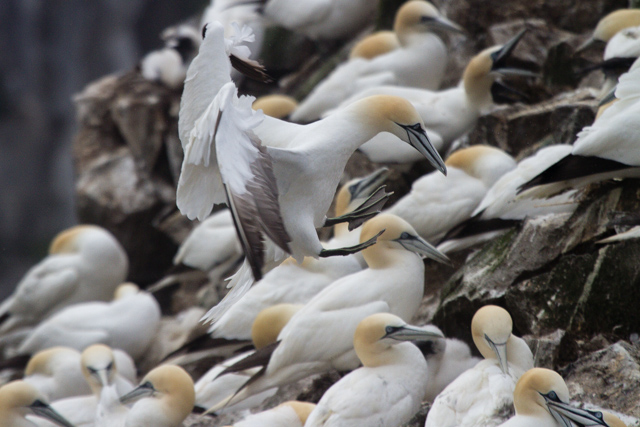 Landings are often problematic, as the runway inevitably consists of your friends and neighbours.

The kittiwake is migratory, returning to cliff-side breeding grounds from mid-May to mid-June.  The nest is a compacted mass of mud, grass and feathers. During the winter the species is pelagic (meaning they live entirely on the sea surface or in the air — they come to land only to breed). A kittiwake diet consists predominantly of marine invertebrates (e.g. squid and shrimps) and fish. It breeds in very large colonies with neighbouring nests usually spaced evenly 30-60 cm apart. Pairs are generally monogamous. (From Encyclopedia of Life.) 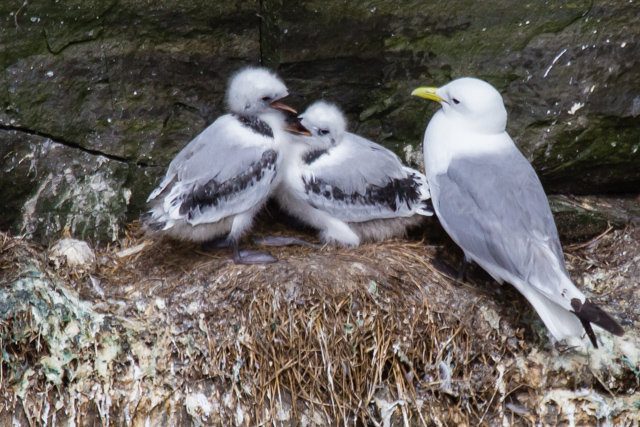 Kittiwake with two chicks. Note the unfertilized egg to the left. This late in the season, according to the biologist at Cape St. Mary, it is unlikely that the egg will hatch.

The Common Murre or Common Guillemot (Uria aalge) is a large auk. It has a circumpolar distribution, and spends most of its time at sea, only coming to land to breed on rocky cliff shores or islands.

Common Murres have fast direct flight but are not very agile. They are more manoeuvrable underwater, typically diving to depths of 30–60 m (100–200 ft), and depths of up to 180 m (600 ft) have been recorded.

Common Murres breed in colonies at high densities, nesting pairs may be in bodily contact with their neighbours. They make no nest, their single egg is incubated on a bare rock ledge on a cliff face. Eggs hatch after ~30 days incubation.  Some 20 days after hatching the chick leaves its nesting ledge and heads for the sea, unable to fly, but gliding for some distance with fluttering wings, accompanied by its male parent. Chicks are capable of diving as soon as they hit the water. The female stays at the nest site for some 14 days after the chick has left. (From Wikipedia) 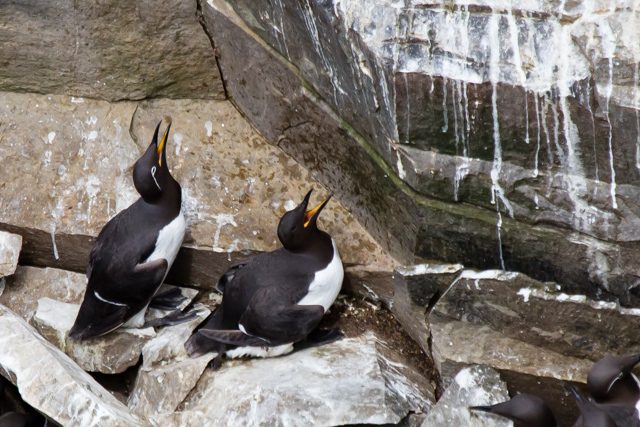 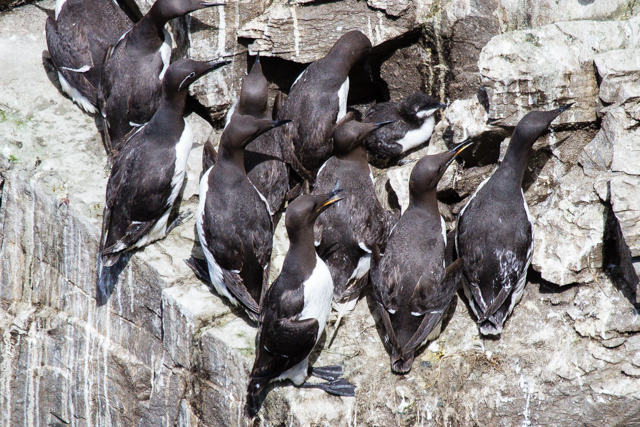 It’s difficult to spot the Common Murre chicks since they often seem to be surrounded and hidden by adults. But you can pick out that well-protected one here. 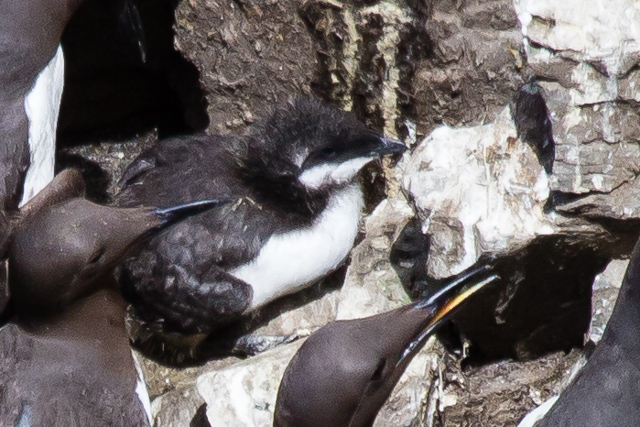 A close-up view of the same image. 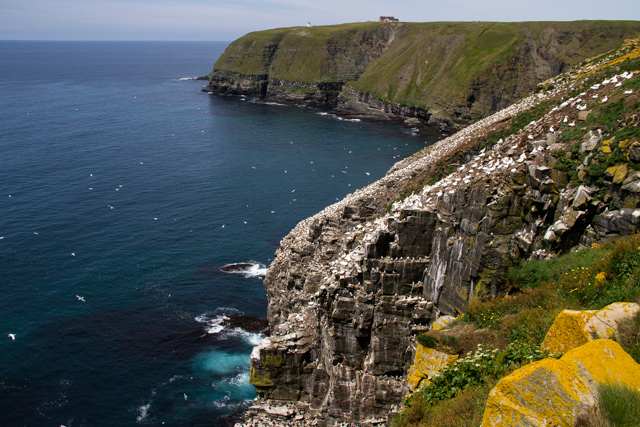 Gannets rule the roost, but the cliffs are also home to kittiwakes and common murres, relegated to the lower ledges.

The Birds of Cape St. Mary

Newfoundland and Labrador is a vast, surprisingly empty territory where nature still rules: humans know their place, and have found it here, generally huddled along the shores of  protected coves and harbours, in full respect of the forces of the sea and wind and storm.  Apart from a few cities and  settlements, the interior is almost uninhabited. (On the 150-kilometer drive from St. John’s to Cape St. Mary after leaving the Trans Canada Highway, I encountered 8 cars.)

Their history is a mixture of hope and tragedy, and like all those who live, uncoddled and  close to the edge, neighbours are used to helping each other out, looking after one another. It’s in their culture and has been integral to their survival.  They call everyone — even a complete stranger like me — “love” and “my darling”, and they do it with no irony whatsoever.

I’ve yet to hear anyone sing a song about Ottawa.

One night at the place I was staying in Gros Morne, a band from Ottawa happened to be playing in the lounge. The sparse audience kept shouting out for Newfoundland tunes, but the band didn’t know any. I doubt they will be invited back. Meanwhile, down the road, a another — local — band was keeping them all toe tapping, delivering to a packed audience exactly what they wanted at ear-splitting volume: good old Newfoundland music and questionable jokes.

Even on the ferry back to the mainland, a young woman with golden hair and a golden voice entertained us well into the evening (’twas a 16-hour overnight crossing), with many of the old timers belting out the tunes with her — a few with a little moisture forming in the corners of their eyes. They were, after all, leaving The Rock.

As was I. I splurged for a cabin and as the ferry yawed me gently to sleep I swear the engines deep down below thrummed softly with a celtic lilt.

Perhaps t’was just a dream.  I awoke within sight of the mainland.

Every journey ends with a single step

I’ve had a blast doing this traveller’s blog. Sometimes, huddled over the portable of an evening, I would imagine how, in days gone by,  many a traveller would end the day by dipping quill into ink and scratching a few lines to a dog-eared journal before snuffing out the candle.  The only difference here is the application of a slight tech upgrade to this age-old tradition.   I hope, gentle reader, that you have enjoyed the ride and perhaps next time I venture forth, we’ll do it all again.