It certainly has made mine.
But to explain how this is possible, I need to tell a short story. Actually, it’s a long story and it begins 100,000 years ago. In Africa, the cradle of our species. At some point back then, a small group of humans migrated north, through to Eurasia. After reaching the continent, populations grew and spread. Ever exploring, ever migrating, some groups travelled west to Europe, others east to Asia and the Pacific Islands and archipelagos in an endless diaspora.
Millennia after millennia the process continued. Vast migrations occurred. Cultures, empires appeared and disappeared. About 13,000 years ago, a few individuals crossed from Siberia to the New World.

Now, fast forward to the year 1000 AD. The Vikings sailed from Greenland to the tip of Newfoundland and established, as far as we know, the first European settlement in North America. We all know the story. I feasted on the Farley Mowat account, Westviking,  when it first came out in 1965, the theory of the Norse voyages still, at the time, controversial; subsumed by the adventure, the bravery, the skill of these seafarers. But I completely missed the most important part of the story. For at some point, on or near the very spot where I am standing here at L’Anse aux Meadows, a Viking explorer made contact with a native of North America. And in that encounter, in that meeting, in those first words spoken, the human encirclement of the planet was completed. And as the realization of that sank in, my spine began its tingle.
Now we can debate whether the meeting of cultures was a good thing or a bad thing — let’s leave that for another time. And archeologists can quibble over whether this actually was the very first contact. But none of that destroys the symbolism of this momentous milestone in our remarkable human journey.

A dramatic  sculpture at the L’Anse aux Meadows site provides an abstract but powerful symbol of this event. Luben Boykov, a Newfoundland sculptor, and Richard Brixel, a Swedish sculptor, created it. East represents the North American culture, west, the Viking and European culture. 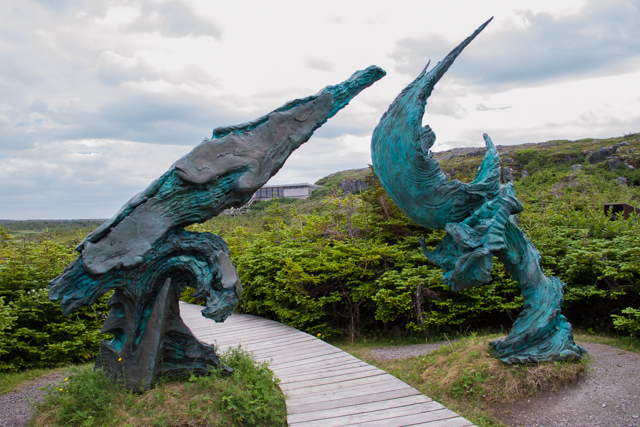 “The two elements symbolically correspond to the geographic points of departure and landing of the Vikings, and their subsequent meeting with Aboriginal peoples. The sculpture interprets and integrates early North American Aboriginal and Viking iconography, ” explained the sculptors in a release.

Guides at Parks Canada told me that the replicated Viking settlement is “about 90 per cent accurate”. They’ve done a tremendous job of giving life to the raw archeological findings discovered on the site in the 1960s.

I was amazed at the advanced level of technology these Vikings had. And I figure that anyone from 19th century rural North America would have felt quite at home here. One feature, that you’ll see in some of these photos, that they are unsure of, is the smoke holes in the roofs. But they know that the settlers found iron ore—albeit of a low grade—locally, and smelted and worked it here on the site. Archeologists also found butternuts, indicating that these settlers had traveled as far south as New Brunswick—there were and are no butternut trees anywhere nearby. 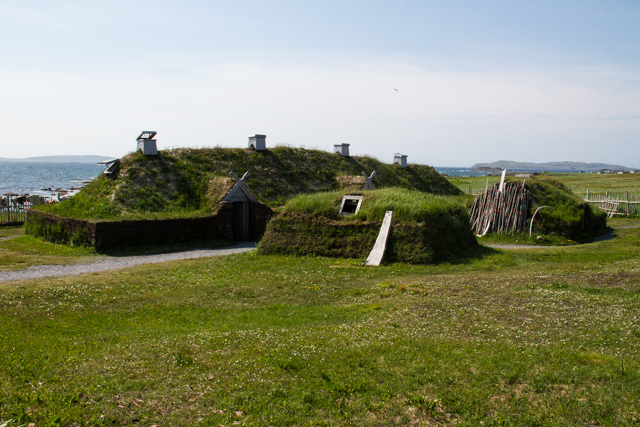 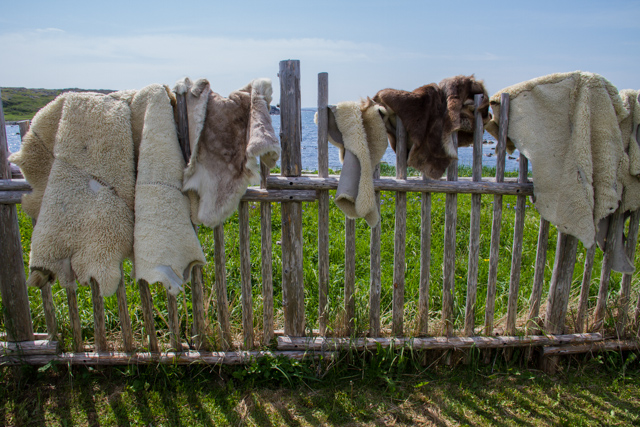 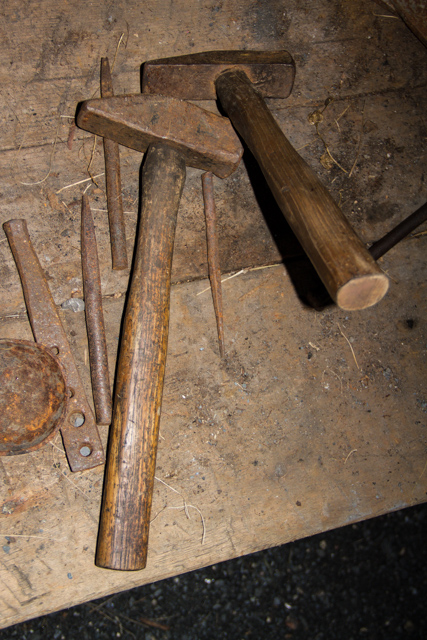 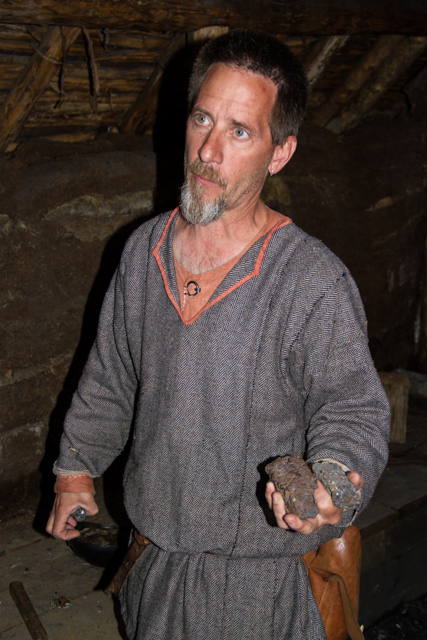 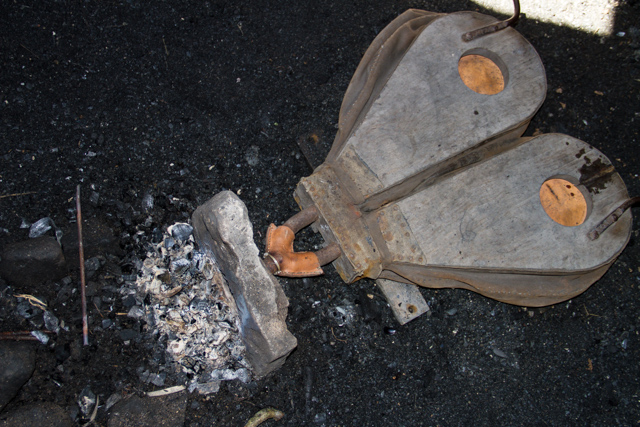 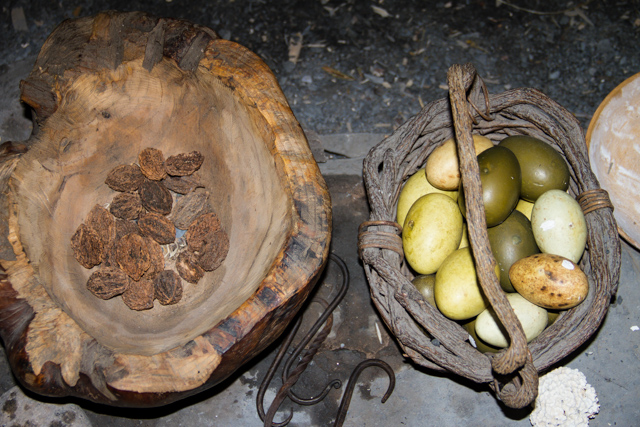 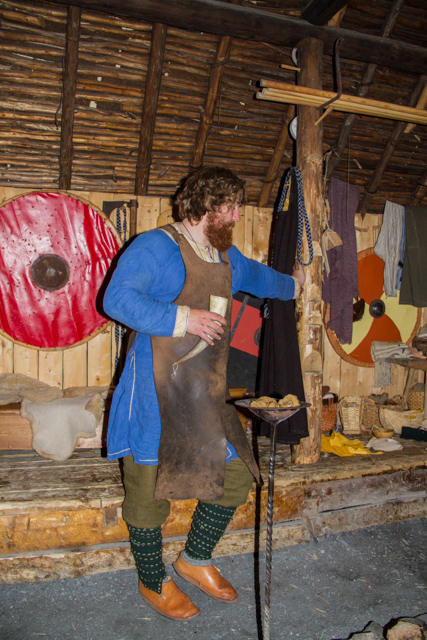 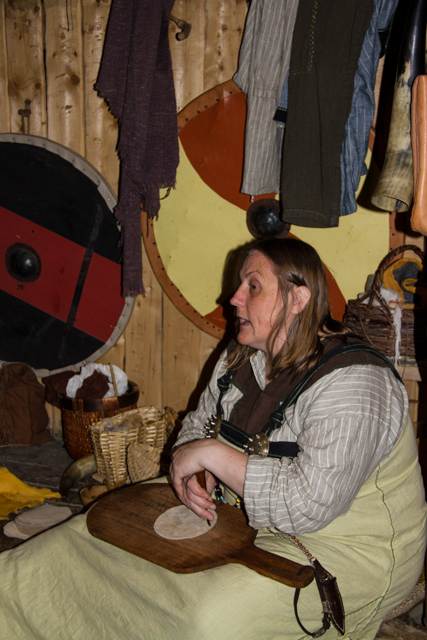 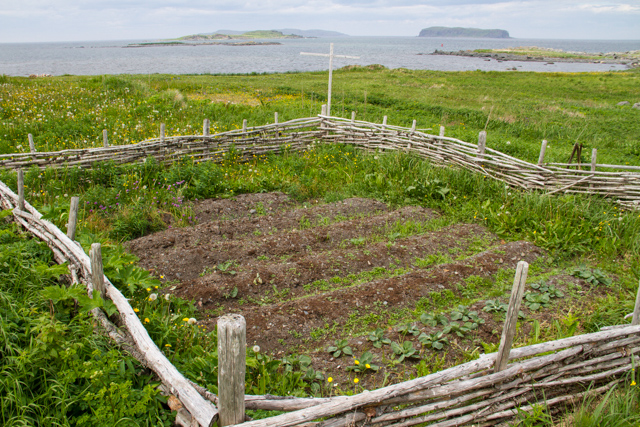 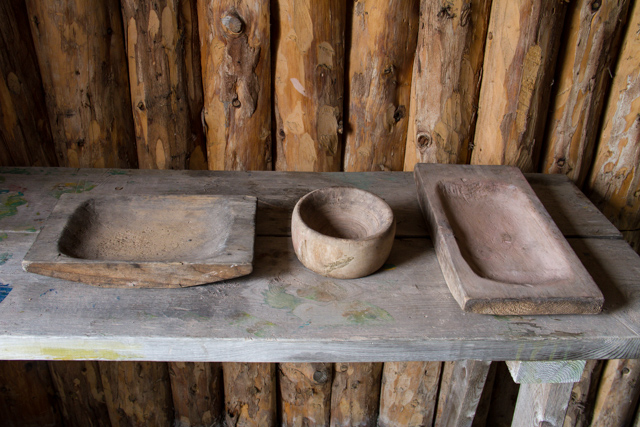 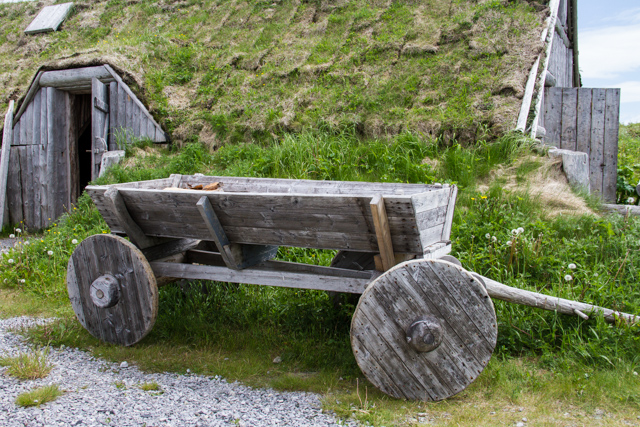 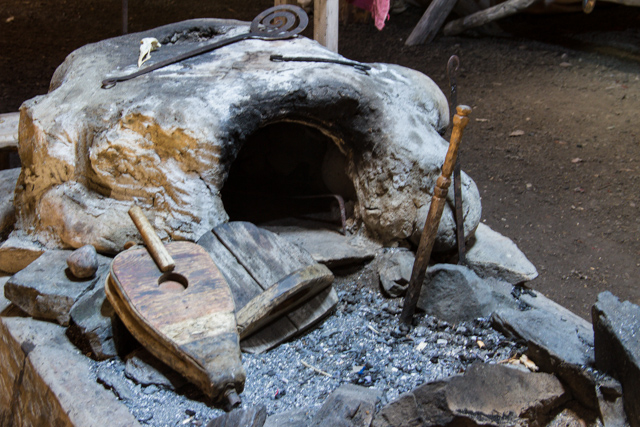 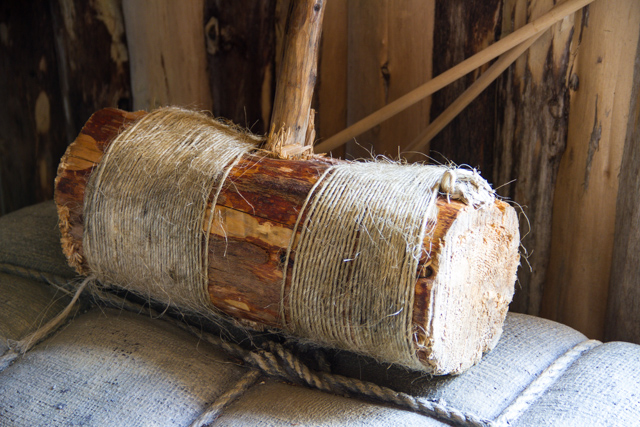 The recreated settlement is barely 50 metres from the original archeological dig. The work is finished and all that remains are slight mounds and ridges overgrown with grass and wildflowers. 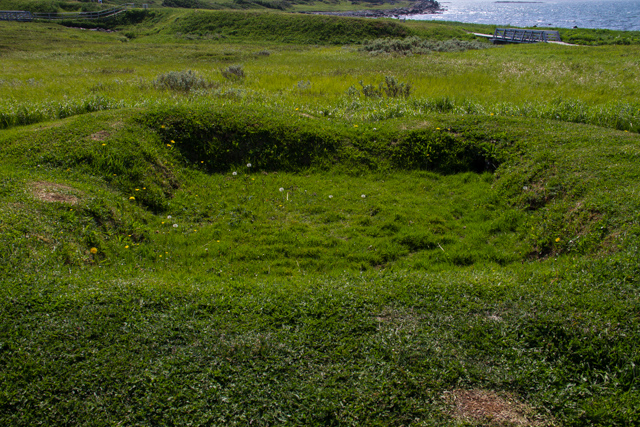 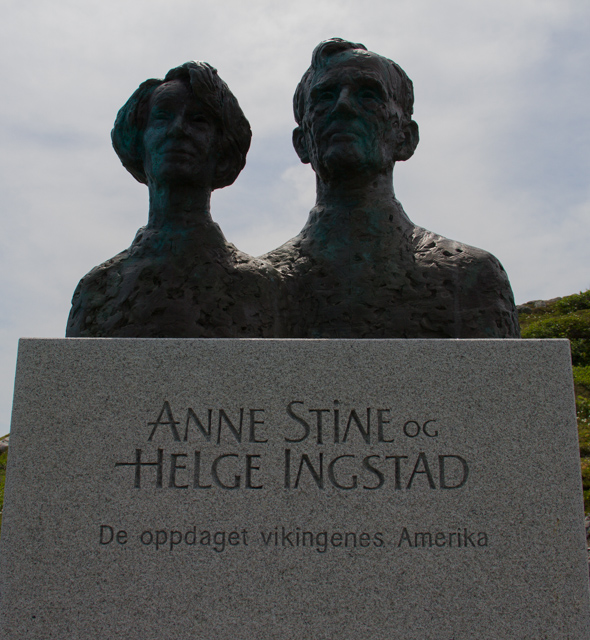 Helge Instad and Anne Stein: The archeologists who discovered and unearthed the site

These photos show both a model and a seaworthy replica of a boat similar to that the Vikings would have sailed. 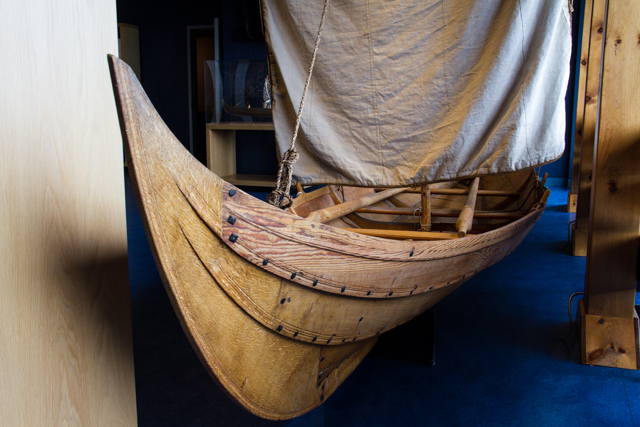 Model of the type of craft used by the seafarers

The Skorra, seen below, retraced the same route, in the 1990s,  of the original Viking voyage.  It was built using plans derived from a found sunken ship in Denmark and constructed using the same materials and methods (caulking was made from pine tar and sheep’s wool, for example) that the Vikings would have employed in 1000 AD.  Only thing is, the original Vikings took, it is reckoned, around 15 days to make the voyage from Greenland. Our more modern-day sailors took one aborted attempt, then 87 days to do the same thing. The boat is now housed in a barn at Norstead, a second Norse village recreation, near the Parks Canada site. 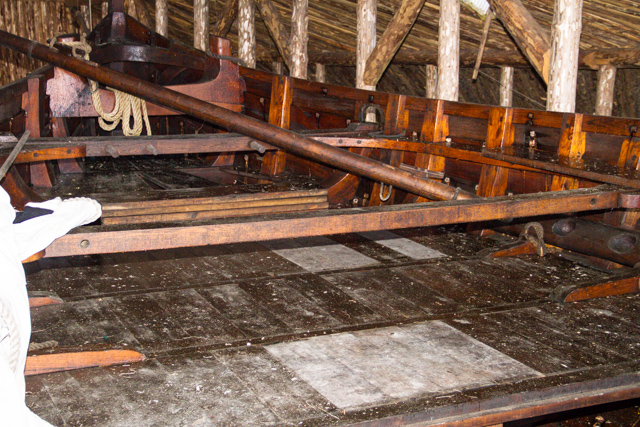 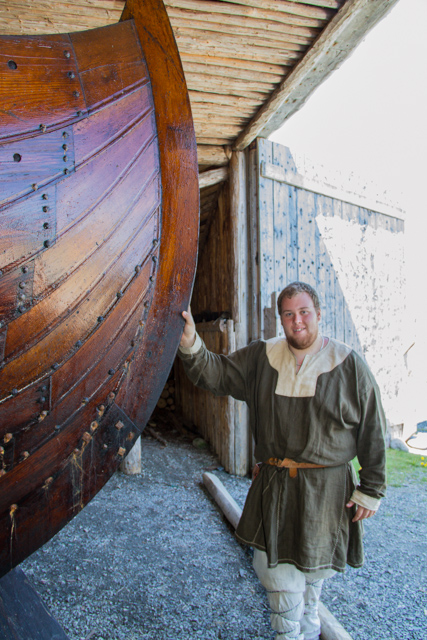 A Viking and his boat 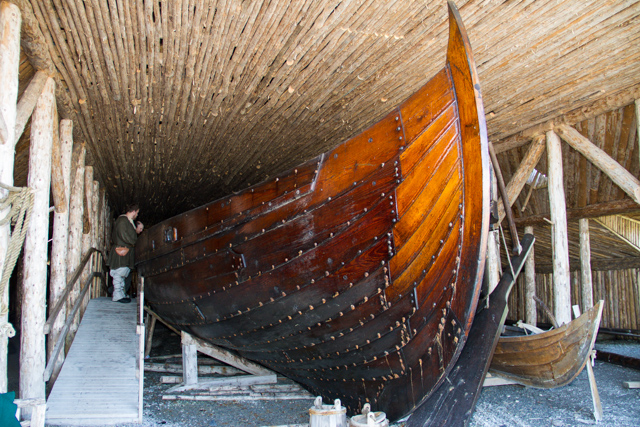 The Skorra: now housed in a boathouse 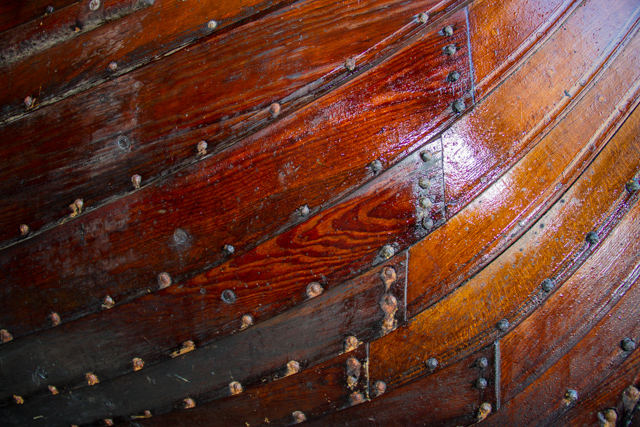 (Next: Catching a ferry today across the Straits of Belle Isle to the Labrador coast for a couple of days. I’m not entirely sure how reliable Internet connections over there, but eventually, I’ll try to do another post.) 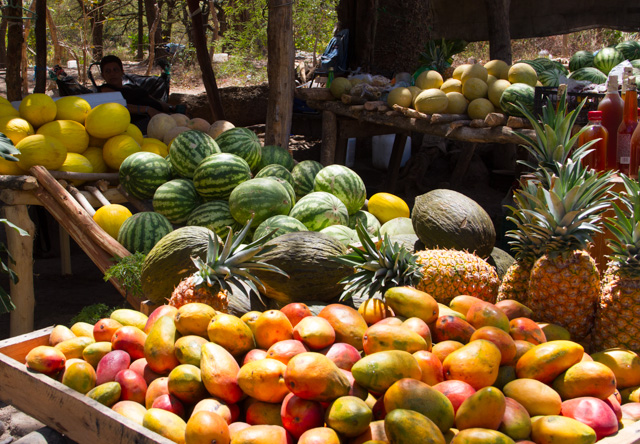